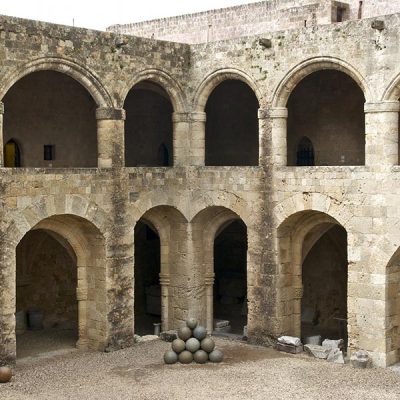 According to Greek Mythology, Rhode was the elder of the Oceanids, one of the daughters of Oceanos (Ocean) and Tythis. Later on, it was thought that she was a daughter of Poseidon (Neptunus) and Alia, or of Poseidon and Amphitritae. She was married to the god Helios (Sun) and gave her name to the island of Rhodes, whose she and her husband were patron gods and where it was situated the center of her cult. It is thought that the name Rhode is owed to the pink hibiscus which was native to the island and was similar to a rose, which is also etymologically related to her name (“rodon” in Greek is the rose). The Telchines, the first inhabitants of the island came to settle here when Helios created the island of Rhodes and had seven sons and one daughter with Rhode. The girl, called Electryo, died a virgin, whereas the sons reigned on the island and became famous rulers and astronomers. Rhode was worshipped on the island not only by her own name but also as Halia and Leucothea.

The birth of the island of Rhodes

The island of Rhodes is related to several myths, some of them stated in the ancient writers and others surviving in the local tradition. Most of them present a version of the creation of the island. One of the most popular myths in antiquity has been preserved thanks to the poet Pindarus. According to this myth, when Zeus and the rest Olympian gods came best of their fight with the Titans and Giants, decided to divide the world. When everybody had already taken one’s part, they realized that they had forgotten the god Helios (Sun), who was absent during the division. Thus, Zeus, the king of gods decided to offer him the first land that would emerge from the waters. At this very moment the island of Rhodes, green and beautiful, emerged from the blue sea of the Aegean. Helios, impressed by the breathtaking beauty of the island, sent to its light and heat and ever since became the protector god of the island. As the myth states, it is due to this protection and help that Rhodes achieved to become the famous island we know during the Classical and Hellenistic periods.

Another myth attributes the beginnings of Rhodes to the love of Helios for the nymph Rhodes, the daughter of the god of the sea, Poseidon. When Helios saw Rhodes, so the myth goes, he was so taken by her astounding beauty that he made her his wife. They had seven sons and one daughter, Alectrona, who died young. Kerkaphos, one of the sons of Helios and Rhodes, had three children: Kamiros, Ialysos and Lindos. They built a city each in Rhodes and divided the island among themselves.

Some say that the famed island derives its name from the nymph Rhodes. Others maintain that Rhodes was named after the rose, and this either because the island was abundant in these beautiful flowers or because the ancient inhabitants likened its beauty to that of a rose.

However, Rhodes was known in ancient times by several other names, among them, Ophioussa, for the many snakes that lived there; Elaphousa, because the Rhodians brought dears to kill the snakes that were there (the dears killed the snakes by running over them) Asteria, for its clear blue and starry sky Makaria, for its arresting beauty Telchinia, because its first inhabitants were said to be the Telchines and Attavyria, after its highest mountain, Attavyros.